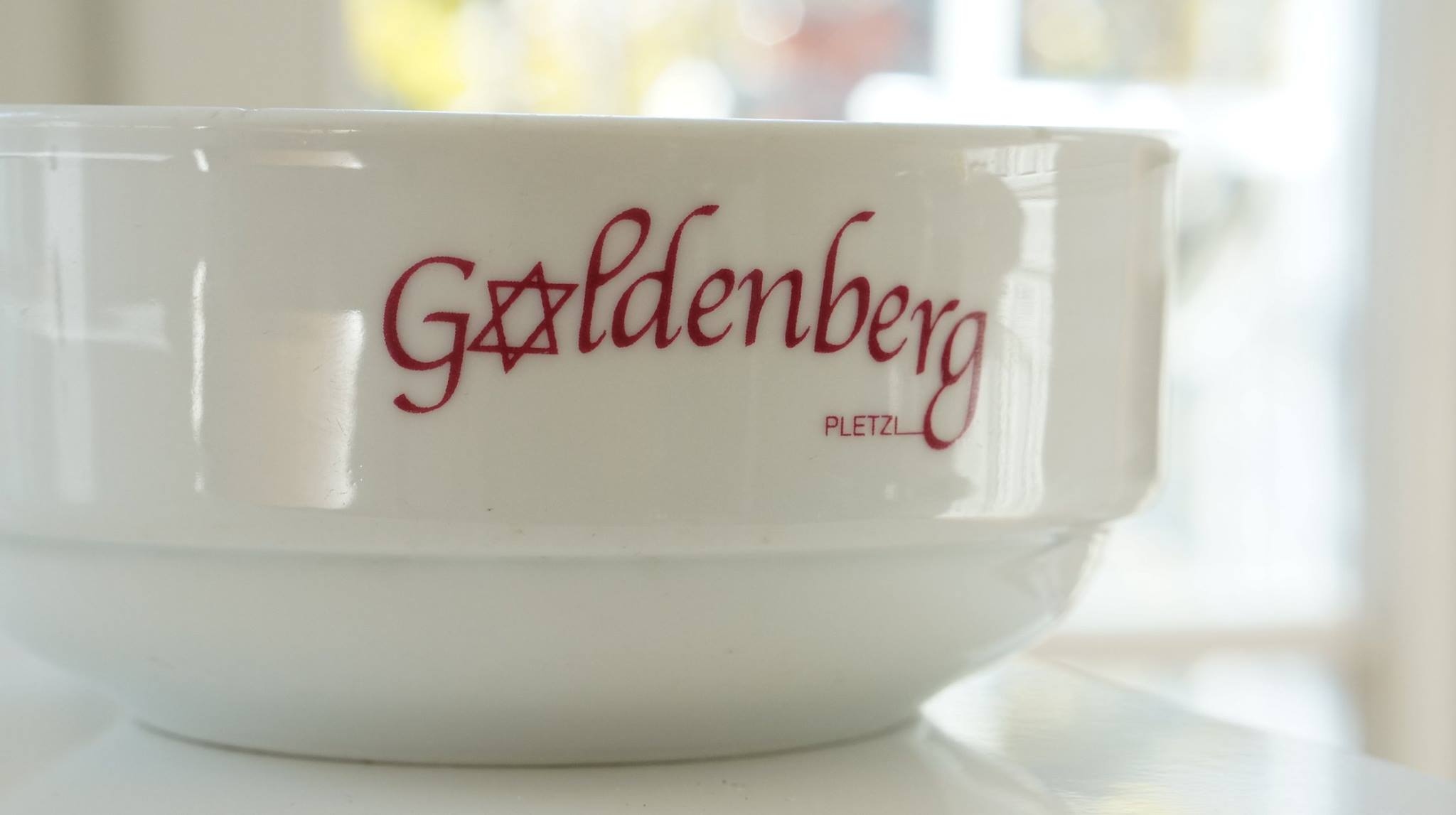 Joseph Goldenberg, was born in 1923 in Paris.

He became famous for his Restaurants chain in Paris : few Jewish delis around the city of Paris.

The main restaurant was called “Joe Goldenberg”. The most famous one is the one located in le Marais which became a meeting place for the Holocaust survivors and the former resistance fighters after the war.

When I travel outside of France, and meet people who visited Paris, most of them tell me that they tried the Godenberg Restaurant and that they loved it. Even my visitors when they take a tour with me, they sometimes tell me that they have been in Paris before and they met my grandfather Joseph. 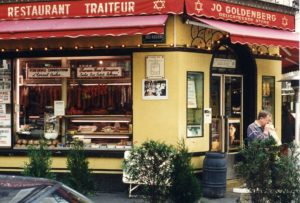 Joseph’s family was composed of 10 children lived in Le Marais, near the synagogue of rue Pavée.

My great grandfather and some of his children arrived from Turkey, just before my grandfather was born ( I don’t the exact date of arrival, but it was probably from 1920 to 1923).

My great grandfather was called Nahoum Goldenberg, and his wife was called Lea Finkelstein. Fikelstein is the yellow boutique in Rue des Rosiers

In his identity papers, Nahoum’s job is ” charcutier”. He is a butcher, and opens a family business in rue des Rosiers, in the Jewish area in Paris that will last for almost a century.

Here is an old picture of the shop, with my grandfather, Joseph Goldenberg. 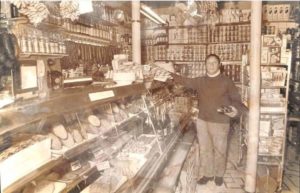 After the war, my grandfather and his brothers decided to keep working at the old family shop, until my grandfather opened a restaurant, that became the delicatessen Goldenberg.

My great grandfather and his wife, as well as 4 of their children, were deported during the war. This is Rue des Rosiers – Paris Jewish Quarter 19340 – 1944 under Nazi Control – you can notice the Jewish yellow star imposed by Nazis on the Jews of Paris : 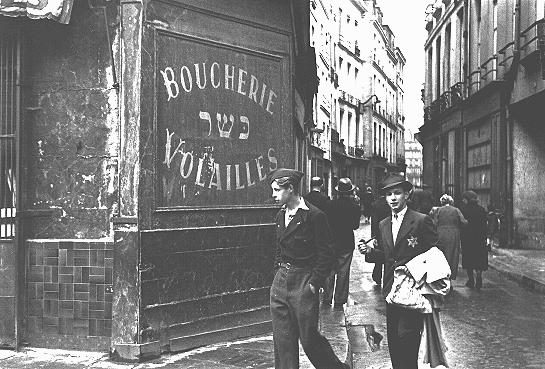 I looked at their pictures recently, because I don’t know who they were and I don’t have many stories or details about them. It was difficult for my grandfather to talk about them, and I was also too young when my grandfather was still alive,to understand how important it is to remember the persons who died in the holocaust, and never forget !

I am very grateful for my grandfather’s achievements, and for the fact that he helped carry the name of my great grandfather.

Today, I am a little emotional, and as I have a lot of time on my hands, I decided to give tours of my quarter and to search the history of Jews in Paris. The good and the bad.

I also write about the Jewish heritage of Paris, and some of my family’s history, to get some nice testimonies about the restaurant and my family’s life, in order to pass it onto my daughter one day. 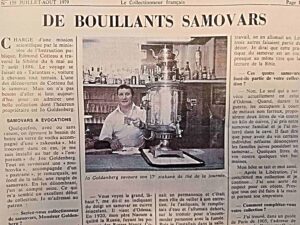 Many famous politicians, even presidents and book writers, cuisine experts came to the Restaurant. I still have visitors, today, in 2022 who come to Paris and still remember the Goldenberg cuisine, his kosher saucages and his restaurant with his Yiddish specialities. 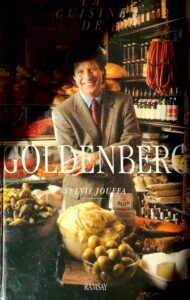 Sylvie Jouffa made a book about the Goldenberg Cuisine where he describes all the Joe Goldenberg receipes. I try sometimes to reproduce them at home.

The Movie of Rabbi Jacob:

In 1973, the French movie “The Mad Adventures of Rabbi Jacob” was filmed in Paris.
It has become a cult classic movie in France , with the movie star Louis de Funes 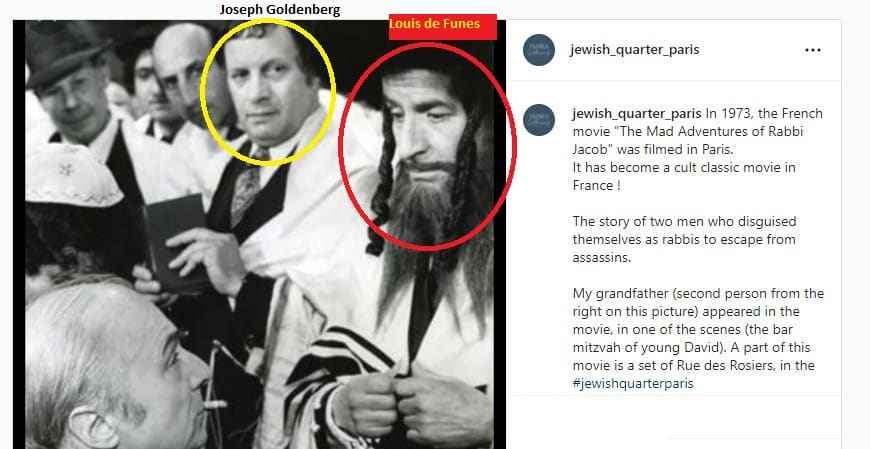 The story is supposed to be funny, about two men who disguised themselves as rabbis to escape from their assassins. My grandfather is the second person from the right on this picture above, appeared in the movie and helped the set for one of the scenes of the bar mitzvah of young David.

A part of this movie is a set of Rue des Rosiers, in the #jewishquarterparis that you can see on my instagram.

A bag of Marbles is a famous french movie about 2 brothers surviving and escaping the Shoah in France.

Contact me if you have more information or if you met Joseph in real life.

I would prefer being contacted by email : flora.goldenberg@gmail.com

If you believe we share the same passion about History, Art and Jewish origins, I will be happy to offer you an authentic tour of the Jewish Paris.

Read about some of my jewish unique tours here.