In the north-east part of Paris, situated on and around a hill, like Montmartre, lies one of the most unique and interesting quarter of Paris, Belleville which means in French « the beautiful town » – an independent commune, until 1860 when it got annexed to Paris.

A friendly working-class district shaped by migrants and artists – it is the birthplace of one of the most famous French singers: Edith Piaf –, Belleville was the scene of various historical episodes in Paris. 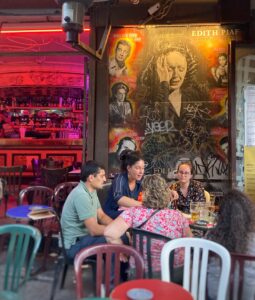 The area of Belleville

The cosmopolite area of Belleville is today a gentrified and lively district, a center of urban culture and basically the Parisian heaven of street art; a wonderful quarter to wander in, and to be explored.
Starting our walk on top of the hill, we will amble in the Parks of Buttes Chaumont, a former quarry, and the more recent Parc de Belleville, whose Belvedere offers a stunning panorama of the center of Paris. 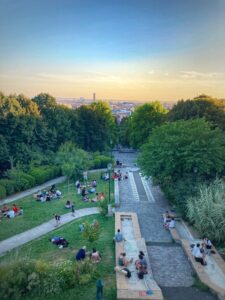 The tour at Belleville

Our tour is an invitation to stroll around the narrow little streets of Belleville whose names recalls some of the functions of Belleville throughout the years: supplying water to Paris,
since Roman times and in the Middle Ages, but also wine and beer, served in various famous cabarets, today typical Parisian Brasseries…
Popular and dynamic district, Belleville has been and remained a quarter molded by Jewish immigrants, imbued with their history and memories: Armenians, Egyptians, Greeks, Asians
– Belleville is the second China Town of Paris since 1980’s…

Yet it is also known as a Jewish area, many Polish Jews settled here since the 1920’s; Tunisians and Algerians Jews since the 1950’s. 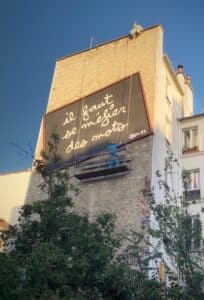 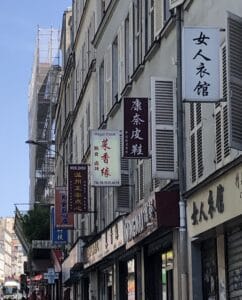 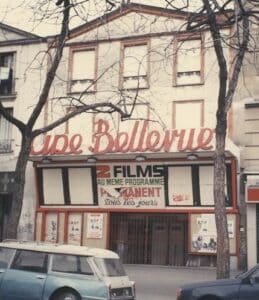 You will discover with Livia colorful, unusual and trendy shops, signs and plaques recalling the past, as well as Parisian synagogues, one of which is located in a former movie theater… 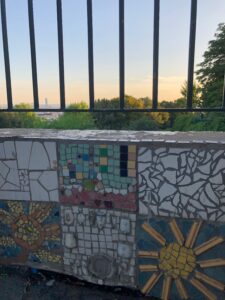 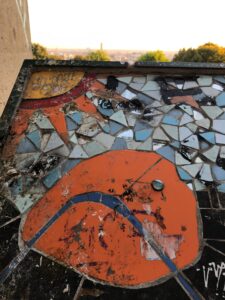 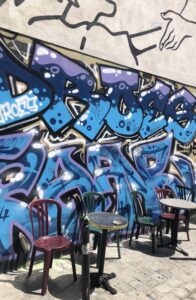 If you feel that this tour is for you, then you can contact us at flora.goldenberg@gmail.com to organize this cute jewish tour for you.

About Flora – Tour guide in Paris

More Jewish tours with unique topics and destination in Paris

Susan Krigel
Verified
Our Jewish walking tour was wonderful. Flora was very responsive in helping us set up our tour. Our tour guide, Livia, was friendly, professional, and very knowledgeable. We really expanded our understanding of Jewish life in Paris.
Read more

Rush Smith
Verified
Flora worked magic and created a custom private tour for my wife and me minding our ages (60s, 70s) and the hot day. She is charming, highly educated in the arts and knows Paris' Jewish history. In a fantastic 11 days in Paris, it was the highlight of our trip.
Read more

Michael Edidin
Verified
Flora is an outstanding guide. Energetic, knowledgeable and friendly she took us on a wonderful tour of the Louvre.
Read more

Marian Ungar Davis
Verified
Thanks to Flora Goldenberg’s charming and expert guides, my 16yr old granddaughter and I delighted in learning the history of Jewish Paris in Le Marais. She also scheduled a fine car and driver to transport us safely around the city & to the airport. We are most grateful!
Read more

Tamar Daniel
Verified
Had the pleasure of touring the louvre with Flora on a 20th anniversary trip to Paris with my husband. We asked for the Jewish highlights tour and Flora was on point! Abundent knowledge but never dull- she kept a great pace for us while allowing flexibility to speed over the areas we found less engaging and dive deeper where we wanted to learn more. Highly recommend! Flora is a skilled, generous and compassionate tourguide. She even helped us find our way back to where we were staying and answered all our questions on where to shop!
Read more

Avi Shteingart
Verified
Flora arranged a tour of the Jewish area of Paris with her associate Chantal. We went with another couple and it with incredibly informative and enjoyable. Chantal really brought the area to life, with many of her own experiences, but also a history and an understanding of Jewish life in Paris and France both in the last 1000 years and currently. She immersed us in the culture that existed and answered all questions thoroughly and thoughtfully. Would highly recommend this tour for anyone!! Avi
Read more

Brian Strauss
Verified
Flora is the absolute best! The most responsive and helpful guide I have ever used in my extensive travels. Her support and guidance were crucial in planing an incredible trip to Paris. With her advice, we saw the best of Paris and Jewish Paris. I wouldn’t use anyone else. And when she wasn’t available for a tour, her friend and fellow guide Benjamin was excellent!
Read more

Ariel Halpern
Verified
Flora provided one of the most exquisite walking tours I have ever been on! Her knowledge on French Jewish history, from the earliest settlers until today, was remarkable. She showed me, along with vast background information, all the wonderful historical gems, as well as the current community thriving in the Marais. I would definitely take another tour with her again and I would highly recommend her to anyone!
Read more