The Synagogue de la Victoire is happy to invite visitors, French and guests from all over the world, to a nice concert of Jewish music.
When : MONDAY DECEMBER 19, 2022 AT 6.30 PM
Address: 44 Rue de la Victoire, 75009 Paris

Link to book a ticket: https://my.weezevent.com/concert-de-hanouka

How to go to the Synagogue de la Victoire : I reccomend you take a Taxi cab or Uber.

This concert is made to celebrate the joy of Hanukkah filled with music:
– Airs from Hallel and the liturgy of Victory
– Popular Hanukkah melodies
– Music from Yiddishland
– Sephardic, Ladin, and American music

The synagogue de la Victoire was created 150 years ago. It is today the biggest Synagogue of Paris. It is open to private visits but also for private events such as a wedding or a barmitzvah. 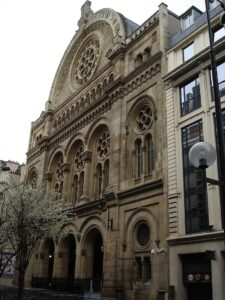 Being in the synagogue of Paris is being part of the dynamic community of more than 2,000 jewish french families, some of which were at the origin of its creation almost 150 years ago and they still go there.

The synagogue has a dual vocation : The Alsatian Ashkenazi rite is maintained there for all weekday, Shabbat and holiday services. It is also related to the modern Orthodox current.

The synagogue is under the rule of the historical Central Consistory of France, which was set up by Napoleon 17 March 1808. Read more about Napoelon and Jews of France.

As a jewish tour guide living in Paris, I wanted to meet with the Rabbin of the Synagogue de la Voctoire.

I studied Jewish History of France (and Europe) in la Sorbonne, but I want to complete my research with live interviews, jewish Art shows and visits of Jewish sites of Paris, and other cities in France.

So I booked a meeting with the Rabbin of the Grande Synagogue of Paris. He was available and I seized the opportunity to have a private interview in the Synagogue. He answered all my questions about the History and the jewish actuality with a lot of honesty and precisions. The interview took more than an hour but we had time to tackle many questions. At my departure, his office offered me a gift to complete my studies of Jewish History and the Parisian Synagogue and we stayed in touch.

If this is something you want to do, it is of course possible for an english-speaking visitor to be introduced to Jewish French personality : Rabbi, Museum director, Restaurant owner, Entrepreneurs … during their trip to Paris. However, there will be a security screening done privately and directly with the Synagogue or the Museum.

We can talk about it in details and in private by email : flora.goldenberg@gmail.com