In the footsteps of Marcel Proust

Have you ever heard of “ Madeleine de Proust “? Or of the 7 volume book “ In search of the lost time ‘?

The name Marcel Proust will immediately come to mind to anybody in France.

Yes, in France, everybody knows the name of the writer Marcel Proust, even without having read any of his books.

Marcel Proust, son of a catholic father and a jewish mother, lived a short but intensive, creative, dramatic life.

In this article you will get to know him and you will want to visit the sites where he resided and found his inspiration for his books.

Maybe you will want to read his books and dive into the “fin de siècle”, the turn of the 19th and 20th century, when France changed from being a country led by nobles to an industrialized country becoming the paradise for the rising middle class.

And you will learn what the Madeleine de Proust is and how Marcel Proust managed to become part of our lives.

The life of Marcel Proust

Marcel was born in 1871, the year of the end of the Franco-Prussian war and the beginning of a new political period, where the nobility lost more and more power to democracy in France.

Marcel’s family was well off, his father was a reputable physician, his mother descended from a wealthy jewish family. Marcel was raised as a catholic but was very close to his mother.

As a child, he developed asthma and therefore had to spend as much time as possible in the countryside, in the house of his uncle and aunt in the town of Illiers.

As a young man, he joined the army for a year, but after his military service, he never had a proper job: he remained living with his family in Paris and remained financially dependent on his wealthy parents.

Marcel spent a lot of time in the “salons”. Around the turn of the century, many wealthy women in Paris would organize receptions on specific days of the week where the people from high society would meet and mix with painters, writers, musicians, philosophers and politicians. These upscale salons were “ the place to be and to be seen” at the time. 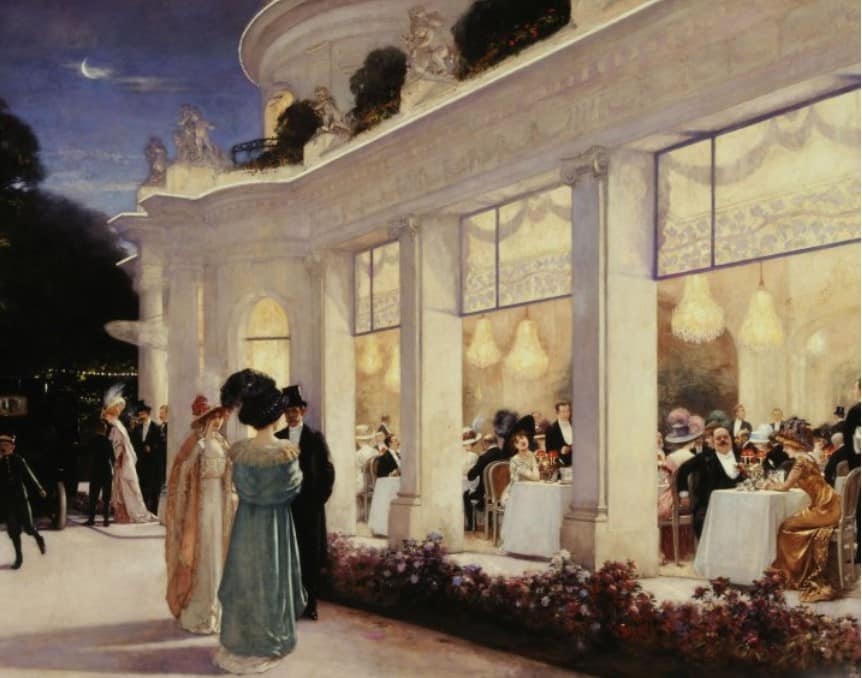 In the early 1900-s Marcel’s parents died, and Marcel remained living in their apartment in Paris.

When World War I started, Marcel was a physically weak man, who would spend most of his time in his bedroom, sleeping during the day, working during the night.

In 1919 he won the most prestigious French literary prize, the Goncourt. He became world famous.

Marcel Proust died in 1922, he was buried in the cemetery of Père Lachaise.

Marcel Proust is considered one of the best writers in France. Next year we will commemorate his death at the age of 50 in 1922.

The secret and intimate life of Marcel Proust

When Marcel developed asthma and had to spend lots of time in the countryside, he would be spoiled every Sunday by his aunt.

She would bring him a cup of herb tea, with a freshly baked cake, called a Madeleine in French. 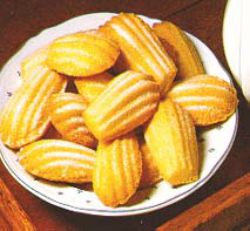 Years later, when without giving it attention, he was drinking the same tea while eating a Madeleine. Suddenly, as the taste of the Madeleine occurred in his mouth, he saw himself propelled back, years earlier, in a protected, sweet setting, his sweet childhood. He wrote about this sensation in one of his books.

(see an extract at the end of the article)

Since then, when a French person talks about a sweet childhood memory, he/she will say that this is “ my Madeleine de Proust “.

French believe that Marcel has homosexual tendencies, but he has also been in love with a few young women at some moments in his life.

He was extremely private about this aspect of his life, but he was once arrested by the police in the brothel for homosexual men.

He was in love with his secretary, Alfred Agostinelli and was devastated when he died.

He loved to spend time at the seaside resort of Cabourg in the most beautiful hotel, Le Grand Hotel.

During the last years of his life he spent most of his time in his bedroom, in the apartment he inherited from his parents, but would go for a late night dinner in a private suite he rented throughout the year in the Ritz hotel in Paris.

The Ritz hotel named a suite “Marcel Proust”, decorated with book shelves and neoclassical style. You can still this suite book when you come to Paris:

In his bedroom, on his bed, he slept, ate, wrote and received his friends.

The walls of his bedroom were covered with cork, to reduce the noise from outside. There were thick fabric draperies in front of the window of his room and in front of the door, so no air could enter.

Proust would wake up at the end of the day and needed a lot of coffee to emerge from a deep sleep powered by sleeping pills.

He would then receive his guests, while lying on his bed, and would sometimes invite them to have dinner with him in the Ritz hotel.

After dinner, they would go back home as people were smoking (a lot) inside the cafes and restaurants, which was unbearable for Proust, who suffered from asthma.

He would then talk, write, and read until the early morning.

When he wanted to go to sleep the caffeine from earlier would prevent him from sleeping so he would take a sleeping pill. Over the time he needed stronger doses of pills and became addicted to them.

Proust had a gouvernante, Céleste, who took care of him and his house, She was very devoted and later talked about Proust with love and care.

The places to visit

The house in Illiers where Proust stayed when he was a child is located near Chartres, about 90 minutes away from Paris. We can hire a driver from Paris and go there.

The house can be visited and is exactly as it was when Proust stayed there. And, you can see where he ate his Madeleine, that became so important in the French language.

The visit to Illiers can be combined with a visit to Chartres, where the magnificent Cathedral with stunning stained glass windows will blow you mind.

A stroll though the small medieval city center is a must, and you will meet very few tourists, this is an off the beaten path day.

If your itinerary takes you to Normandy, you could have tea in the Grand Hotel in Cabourg, where Proust would spend lots of time in the summer.

Along the sea you can walk on the promenade Marcel Proust and admire the villas, built in the time when Proust stayed there. You can also go to the nearby and lovely Trouville. Proust would often take a taxi from Cabourg to Trouville where the ladies that organized the “salons” in Paris , would perpetuate this tradition in their villas in Trouville.

In Paris you can walk by number 102 on Boulevard Hausman, where Proust spent his last years ( in bed ). 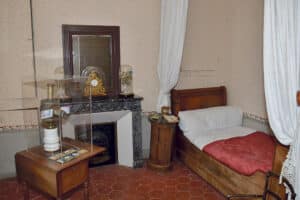 In the recently reopened museum Carnavalet in Paris, the original bedroom of Marcel Proust was transposed.

And of course, you can visit his tomb at the incredible cemetery of Père Lachaise to pay a tribute to Marcel. 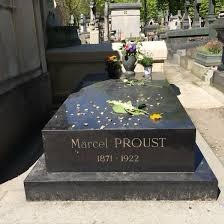 His books and his cake

If you have never read anything of Proust, I do recommend you read at least one extract or few pages of his books to get why he is famous.

His masterpiece, the Search of the lost time, is as I mentioned very long, it consist of 7 separate books.

But you will find all the aspects of his life: the unanswered love for certain women, homosexuality in France in his time, the war, friendship.

But you can always ask me where to buy the best Madeleine in Paris…..

A genius quote from Proust : “ In Search of Lost Time “

“…My mother, seeing that I was cold, suggested that I take a little tea, contrary to my habit. I refused at first and, I don’t know why, changed my mind. she sent for one of those short, plump cakes called Petites Madeleines that looked like they had been molded in the grooved valve of a scallop shell. And soon, mechanically, overwhelmed by the dreary day and the prospect of a sad tomorrow, I brought to my lips a spoonful of the tea in which I had left a piece of madeleine to soften. But at the very moment when the sip mixed with the crumbs of the cake touched my palate, I started, attentive to what was happening extraordinary in me. A delicious pleasure had invaded me, isolated, without the notion of its cause. He had immediately made the vicissitudes of life indifferent to me, its inoffensive disasters, its illusory brevity, in the same way that love operates, by filling me with a precious essence: or rather this essence was not in me, she was me. I had ceased to feel mediocre, contingent, mortal. Where could this powerful joy have come from? I felt that it was linked to the taste of tea and cake, but that it exceeded them infinitely, should not be of the same nature. Where did she come from? What did she mean? Where to apprehend it? I drink a second sip where I find nothing more than in the first, a third which brings me a little less than the second. It’s time for me to stop, the virtue of the drink seems to be diminishing. It is clear that the truth I seek is not in him, but in me…”

I hope you found the article useful and if you want to see more of Marcel Proust, you can send me your wishes by email : flora.goldenberg@gmail.com

I will be happy to hear from you 😉

We can also go together to the Carnavalet Museum in Paris or even better, go to Pere Lachaise cemetry and experience a tuely unique tour in Paris. 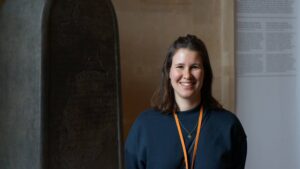 This exhibition is the first in France to present Proust through the prism of his Jewishness. 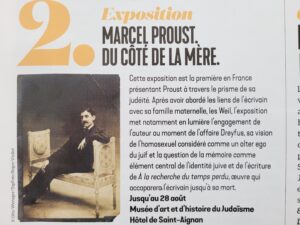 After addressing the writer’s ties with his maternal family, the Weils, the exhibition highlights in particular the author’s commitment at the time of the Dreyfus affair, his vision of the homosexual considered as an alter ego  of the Jew and the question of memory as a central element of Jewish identity and of the writing of In Search of Lost Time, a work that would monopolize the writer until his death.