Language : Only in English

What is Pere Lachaise ?

The Père-Lachaise cemetery is not only a prestigious burial ground but also a Parisian monument, an open-air museum ranked as the second most beautiful cemetry in the world.

As we stroll through its grounds, we can discover the tombstones of some of the most famous French personalities, such as Honoré de Balzac (writer) , Colette (writer and féminist), Eugène Delacroix (painter), Marcel Proust (writer) and Sarah Bernhardt (actress) for example.

The list of famous individuals who are buried here includes 40 singers, 40 composers and 75 painters. 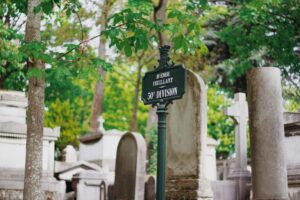 Who is buried in Pere Lachaise Cemetery?

The lovers who lived in the Middle Ages, Heloise and Abelard were the first people of note to be buried here in 1817, when the cemetery was still new. The remains of Molière and Jean de La Fontaine were relocated here the same year.

Jim Morrison’s tomb is the most visited one in the cemetery. Legions of fans come to pay their respects to the singer every year on 3 July, the anniversary of his death.Oscar Wilde, Gertrude Stein, Edith Piaf are just some more names of notable people’s tomb that we can find at the cemetery of Pere Lachaise. 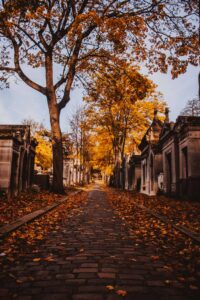 The visit of Père Lachaise

We will discover Paris in a different way, through the stories of the lives of these unique personalities, who left their marks in art or history. You will hear many anecdotes, while discovering one unique park of Paris, which is still considered today as one of the biggest green spaces in the city.

Parisians like to walk through the Pere Lachaise cemetery to enjoy the quiet atmosphere of this park, built on the hill, that offers one of the most unique views of the city of Paris. 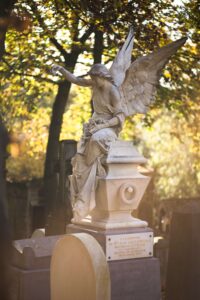 This visit is a way to discover a quiet place in Paris,where some of the most famous Parisians are resting today.

by email for the private tours in Paris

The History of Pere Lachaise

The history of Pere Lachaise can be traced back to the late 18th century when the city cemeteries in Paris were getting full prompting the city administrators to roll out plans to develop larger cemeteries outside the city. The escalating problem of overcrowded cemeteries in the city became the brainchild idea behind the opening of Pere Lachaise cemetery in 1804 by Napoleon I (Rydell et al., 2018). The name of the cemetery was coined from Louis XIV confessor, Pere Francois de La Chaise who resided within the precincts of the cemetery in the 17th century (Lagacey, 2019). The 17 hectares of Mount Louis located on a hillside was purchased by the city of Paris in 1804 with an aim of transforming it into a cemetery. Alexandre-Theodore Brongniart, a neoclassical architect was tasked with the responsibility of designing the cemetery. Drawing his inspiration from the English-style gardens, he came up with a design of the cemetery with uneven paths adorned with trees of different species, alongside carved graves.

At the initial years following its grand opening in 1804 at the behest of Napoleon I, the cemetery attracted few burials as the Parisians considered it far away from the city. Additionally, the Roman Catholics failed to take cognizance of the cemetery to bury their loved ones on the premise that the place was not sanctified by the church (Roark, 2018). Consequently, the cemetery harbored 13 graves only in 1804. The administrators of the cemetery embarked on a radical marketing campaign to ameliorate the cemetery’s stature and attract more interments. Consequently, the remains of Jean de La Fontaine, a French Poet and Moliere, a well-known French playwright were relocated to the cemetery in less than a year after its opening (Vizetelly, 2019). Despite failing to prove its popularity within its first years, the move augmented the profile of Pere Lachaise. As a result, there were 44 internments in 1805 rising to 833 in 1812.

The administrators further engaged another radical campaign to woe more internments in the greatly revered cemetery. In 1817 at the behest of Josephine Bonaparte, the remains of Abelard, the renowned Medieval French philosopher and poet were transferred to the cemetery (Roark, 2018). It was followed by the transfer of the remains of Heloise, a French nun, philosopher and writer alongside his monument canopy. With the two latest entombment of two significant personalities at the entrance of the cemetery, a huge influx of internments followed rising to more than 33,000 in 1830 (Roark, 2018). As people clamored to get interred among the famous people, the need for expansion emerged to cater the needs of the rising numbers.  Consequently, the expansion of the cemetery took place in 1824, 1829, 1832, 1842 and 1850. In the subsequent years, the Pere Lachaise has registered an influx in numbers of internment including famous personalities and writers, culminating to more than 1 million bodies interred as at the present.

Heloise was a French nun, philosopher and writer synonymously renowned as the woman of letters. Apart from writing she held high reference as a philosopher of love and friendship whose iconic quotes stands to date (Toussaint & Decrop, 2013). She was also a highly classified abbess in the Catholic Church. Born near Paris France around 1100, she developed a repute for intelligence and a gift in writing growing up as a young woman. She wrote plays, hymns and poems.

Her coming to fame in history is attributable to the love relationship and correspondence with Abelard, the renowned medieval theologian who later became her collaborator and husband. In her philosophical works and writings, she is acknowledged for exuding critical intellectual impact and raising mind-boggling questions in the minds of other philosophers.

She is regarded an epitome of French literature and primordial inspirer for the courtly love practice based on her surviving letters. She is well known for erudite correspondence the foundation of bildungsroman genre in the Latin based classical epistolary (Toussaint & Decrop, 2013). She is an iconic figure in establishing a blueprint for the representation of women in scholarship due to her controversial depiction of gender and marriage, a foundational basis for the development of the contemporary feminism.

Richard Wright was born in September 4, 1908 in the Roxie plantation in Mississippi, United States. He is well known author whose interest lied in novels, poems and non-fictions (Hayes, 2019).  The epitome of his literature delved on the plight of African Americans subjected to racial discrimination in the late 19th century to mid-20th century in the United States. 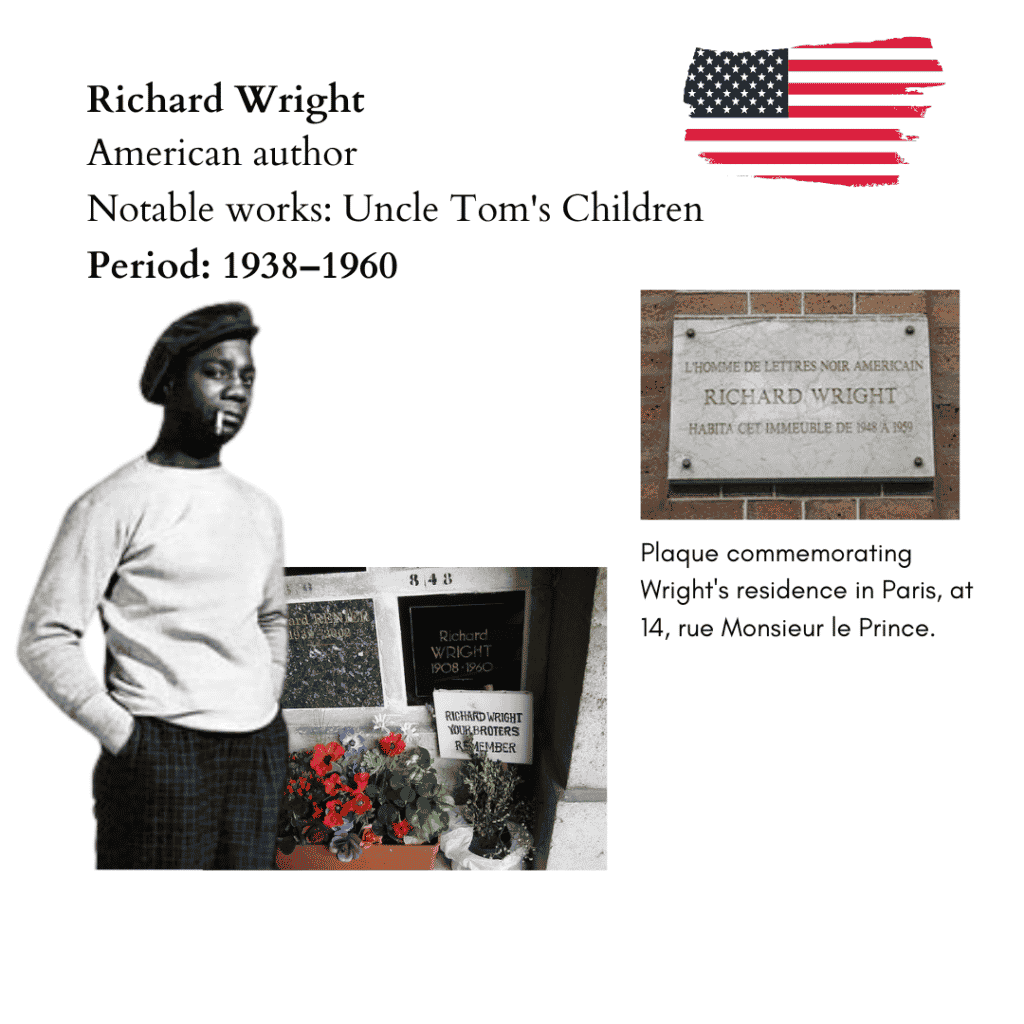 The American born writer is famously known for his work, the Native Son. He relocated permanently to Paris at the aftermath of World War II in 1946. He naturalized as a French citizen and made friends with French writers the likes of Albert Camus, Jean-Paul Sartre and Chester Himes.

Wright’s explosive power against the racial discrimination evinced itself in his last polemical lecture in an American Church in Paris where he addressed issues of racism and segregation the Black artists faced in the United States. He contended that the American society harbored discriminatory accepted privilege to enslave the most militant blacks whenever they expressed remonstrance on the dissatisfactory segregations (Hayes, 2019). Some of the Wright’s work revolving around the issue of racism and Black Movement suppression in the United States have been published posthumously such as the Black Boy, despite his death in the November 28, 1960. His remains were interred in Pere Lachaise cemetery following his demise.

Oscar Wilde was an Irish novelist, poet and playwright whose entrance to France was by a virtue of circumstances. A British court convicted him for indecency with men, attracting a two-year imprisonment with hard labor (Canovas, 2015). After serving his jail-term he fled to exile in France where he stayed until his demise. However, during his short stint in France, he amassed massive success and popularity for his literary work. 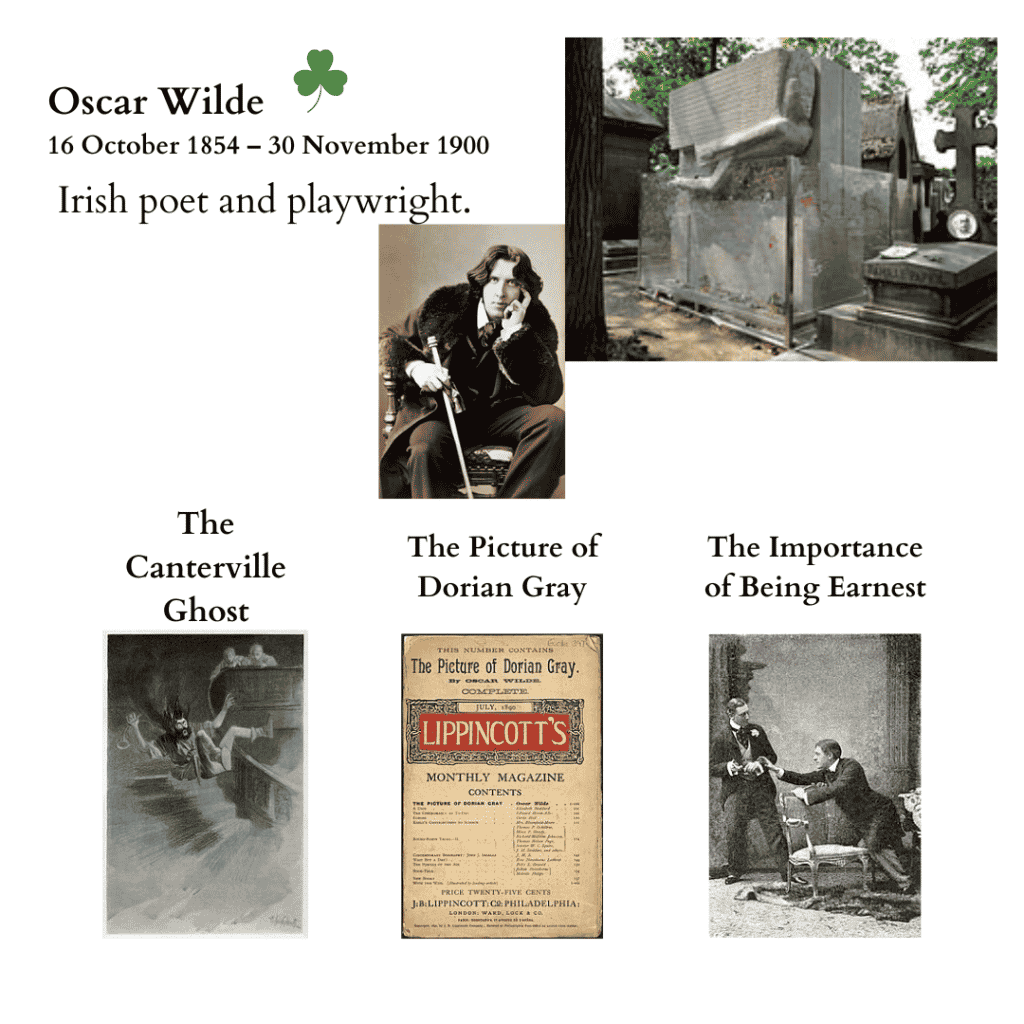 Upon his death, his remains were interred at Pere Lachaise cemetery. Sculptor Jacob Epstein created an Egyptian-themed tomb for Oscar. However, the sculptor has sustained damages and attempts of obliteration throughout the years as visitors temper with it. The Efforts to restore the original acumen of the sculpture has ended up degrading it further.

Hayes, J. L. (2019). 16 ‘Though I Walk through the Valley’: Teaching Richard Wright through Experiential Learning. Dark Tourism and Pilgrimage, 168.