My name is Flora Goldenberg,

I am a Licensed Tour Guide who specialized in the Jewish Walking Tours in Paris. In this post below we will see all the Kosher signs in Paris : The Glatt, The Rottenberg, The Beit din of Paris. I will also give you some restaurants for each supervision: Glatt and Kosher.

Here is the Loubavitch sign for Paris in Blue at the left. This sign is very to see in Paris but it is meant for a Glatt Kosher ritual and hass a very strict supervision. 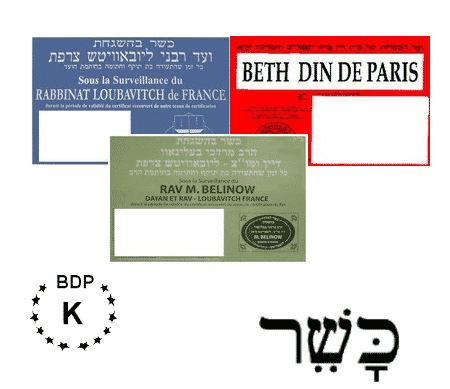 2 – The Rottenberg Glatt kosher sign in Paris in White + Black 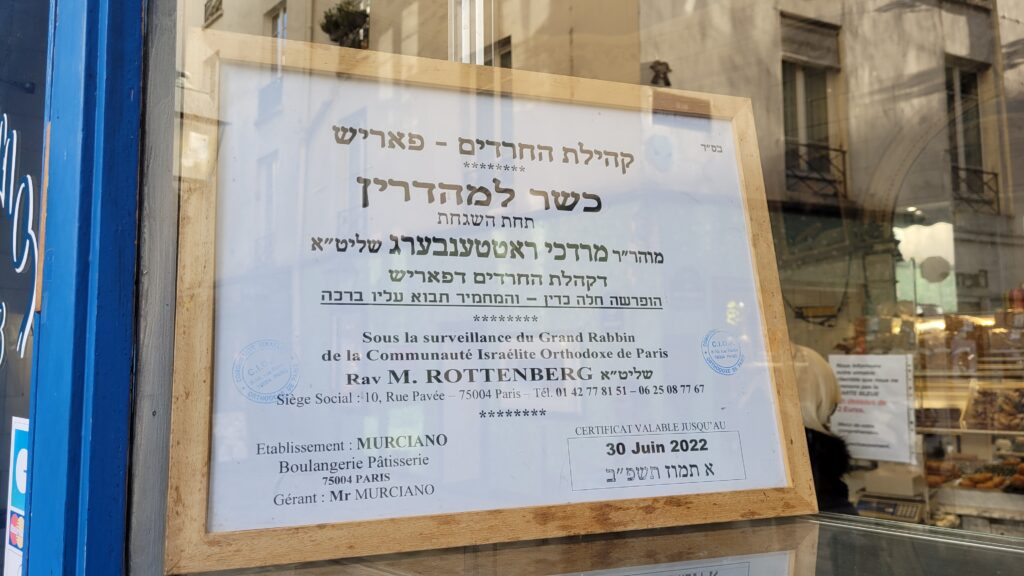 Don’t be surprised to see both (the one from Beth Din, and the one from Orthodox community) as in Murciano Bakery below. Sometimes, a restaurant or a bakery is under both supervisions.

The Orthodox community which is based on rue Pavé, in the jewish quarter in Paris Le Marais, is super kosher, so it is fine for the Glatt kosher restaurants in Paris.

So here are the signs to look for, if you’re eating kosher in Paris (with the specificities)

Look for this sign: This is maybe not Glatt Kosher – but Kosher. If the sign is big with Orange Color + “Beth Din de Paris” inscription = true Kosher 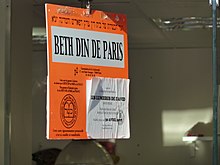 This bright orange sign in comes from the Beth Din of Paris, which is regulated by the Consistoire : a major Jewish organisation in France.

This is kosher, but Not Glatt : See the list of Glatt kosher Paris here

Important Note : Some Restaurants in Rue des Rosiers, put the David Star on their storefront or a Mizouza on the boutique restaurants, but this does not mean they are Kosher.

Also, they are often open on Sabbath and in holidays.

I am sorry to tell you this: unfortunately, some of the restaurants in Rue des Rosiers are not Kosher and disguise as Jewsih held restaurants.

Even though they write by hand : “Casher” or “Kosher” on their boutique fronts, they have no supervision and they open on Sabbath…

Becareful. Try to spot the Kosher Signs before buying.

The Beit Din de Paris is a big Orange Sign or the Rottenberg or the blue Loubavitch Sign. These signs can not be faked though. To forge a false Kosher sign is punishable by the law.

PS: The real kosher restaurants do not open on Saturday in Rue des Rosiers.

It is Israeli owned and has 3 competitors/imitators in front of his restaurant : Mivami, Hana, King of Falafel

L’as de falafel means : The Ace of the Falafel. This is where the celebrities like Natalie Portman go to eat a falafel in Paris. They have pictures of everyone who goes there: from movie stars to politicians… All the celebrities faces are on the wall.

What is the difference between l’As de falafel and the other restaurants ?

The difference is mainly in the kashrut observance and can be noticed in the Bread making, in the waiting line and in the ambiance.

1 – L’as du falafel is really Kosher and is owned by Jewish French owners. It closes on shabbat. On shabbath, the other restaurants stay open and try to get their money back, because during the week, everyone goes to l’as du falafel. So, the Jewish style is just a marketing “style”.

4 – L’as du falafel has a fun Israeli & young ambiance. But it can be loud and very agitated for some people.

It is funny to see that many restaurants are imitating L’as du Falafel who changed it is logo to : “Always imitated but never duplicated”

However, it is pittyful to see that the other restaurants are using fake kosher signs or trying everything to appear Jewish or Kosher but it is not fooling anyone.

This restaurant makes falafels, pizzas, decothe style is a bit everything french casual with pizza with tuna, pasta, grattins, falafel, crepes, soups, fish of the day.

The good points: It is kosher, it has no long waiting line and it has a delicious bread and a very religious (Jewish French orthodox) ambiance inside, but everyone is friendly and welcoming to liberals and non-jews. So if you want to go there as a tourist, you will be welcome. 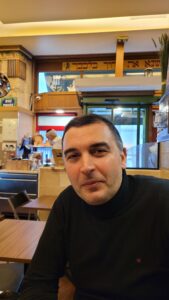 a pricture of Sam – our driver in Paris – from inside Pitzmann restaurant, his favorite restaurant in the Jewish Paris.

French-style Kosher restaurant in a small jewish street of Rue des Ecouffes. Tasty food. It is very near l’As de Falafel, few steps away but they are not in competition because the ambiance is very different. In Rodchenko, the seating is more comfortable and the food is french and the restaurant is more elegant.

They offer both sephardic and ashkenazi pastries !

This is a bakery that you can not miss in Rue des Rosiers. It is an old and esthetic Jewish bakery in my opinion as the owners, originally from Morocco, kept the french ornaments inside, like the in the 19th century.

We will explore the Jewish Quarter located in the heart of Paris, the “Pletzl”, which has been the center of Jewish life in Paris since the 13th century.

While walking in the paved narrow streets of Le Marais, you will learn about the history of the Jewish communities in Paris, for more than 2000 years. We will talk about the history of the Jews in the Middle ages, when they were persecuted and expelled from the country in 1394. We’ll talk about the time of the French Revolution, and the occupation of Paris during WWII, and you will have the chance to discover some hidden places that only a local can know about.

I organize visits inside the synagogues.

We will discover the Jewish shops, bakeries, bookstores.

The tour can include a visit of the Holocaust memorial in the end.

After the tour you can stay in Le Marais for lunch, and maybe try the famous best falafel or the new trendy Jewish restaurants in Rue des Rosiers.

*For Individuals or Couples who want to join a grouped tour and share the price , click here

*For Families with Kids and Teenagers in Paris : I prepared games, questions and treats for children.

*For more Jewish restaurants and food , or for more synagogues: I prepared a map for the Jewish Quarter Paris on this link

Flora Goldenberg – License to guide in Paris – Available on 2022