When we visit the Louvre, I always try to take you to a deserted wing where a strange statue awaits us: the statue of Ayn Ghazal.

Picture of Flora Goldenberg in the Louvre next to Ain Ghazal:

Why do I want to show you this strange statue? There a numerous reasons.

First of all, this is the oldest statue that you can see in the Louvre museum.

It dates back to approximately nine to ten thousand years ago. 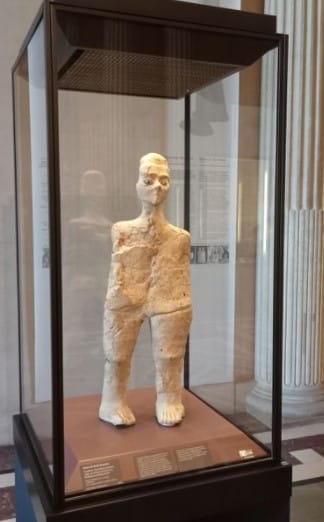 In this period men knew how to use different mineral materials like sandstone, flint, chalk, but they did not know yet how to fire them: pottery and ceramics did not exist yet.

The site where this statue was discovered is called Ayn Ghazal : Ayn Ghazal is located in Jordan, near its capital Amman. Ayn Gazal means the sources of the gazelles. Ayn Ghazal was located in what historians call the fertile cressent, a territory that stretched from Egypt to Irak, englobing all of current Israel and the east of Jordan. It was, like the name suggests, a very fertile territory where men settled ten thousands of years ago and started farming and building the first villages.

In 1984, 36 statues were discovered in a pit of a village house. This statue that we will see on our Jewish Louvre Tour is one of them, the others are scattered in different museums all over the world.

The statue was made from gypsum and reed, two natural materials that could be found at Ayn Ghazal.

The eyes were painted with bitumen. Bitumen could be found in the nearby Dead Sea. It was a rare and precious material.

Bitumen was naturally formed under the bottom of the Dead Sea, and after it would remade itself from the bottom, it would appear at the surface of the water in small quantities where it would float until men would take it.

Here is an interesting detail:

Did you know that the Pharaos of Ancient Egypt wanted to control the Dead Sea area because of its bitumen?

Why was that? Because this rare and precious material was used for the momification process.

What does the statue Ain Ghazal represents

It has no arms so it does not represent a human being. But it does look like one.

Maybe it represents ancestors, maybe it is a god or a goddes, maybe it was there to preserve the memory of an infant or a mother…

The whole body of the sculture rests on two big feet, with lines which cut out the toes of each foot. The big feet support two thick unsymmetrical formless legs, unequal in width.

The statue lacks arms. It is assumed that she was dressed in various pageantry and colors.

The weird head emerges from this shapeless trunk. The face appears smooth and clear, with a nose and nostrils, a black line for the mouth and two extremely simple eyes made up of two eyelids and two pupils, which gaze at us with a funny expression. The small sign of the cage informs us of the simplicity of the two materials used: gypsum plaster for the white material, and bitumen for the eyelids and pupils. It was assembled on a frame of braided fiber ropes.

As writing was not invented yet, nobody left us an explanation, so we will probably never know.

But once you have seen the statue, you can never forget it, and maybe that that was the purpose? 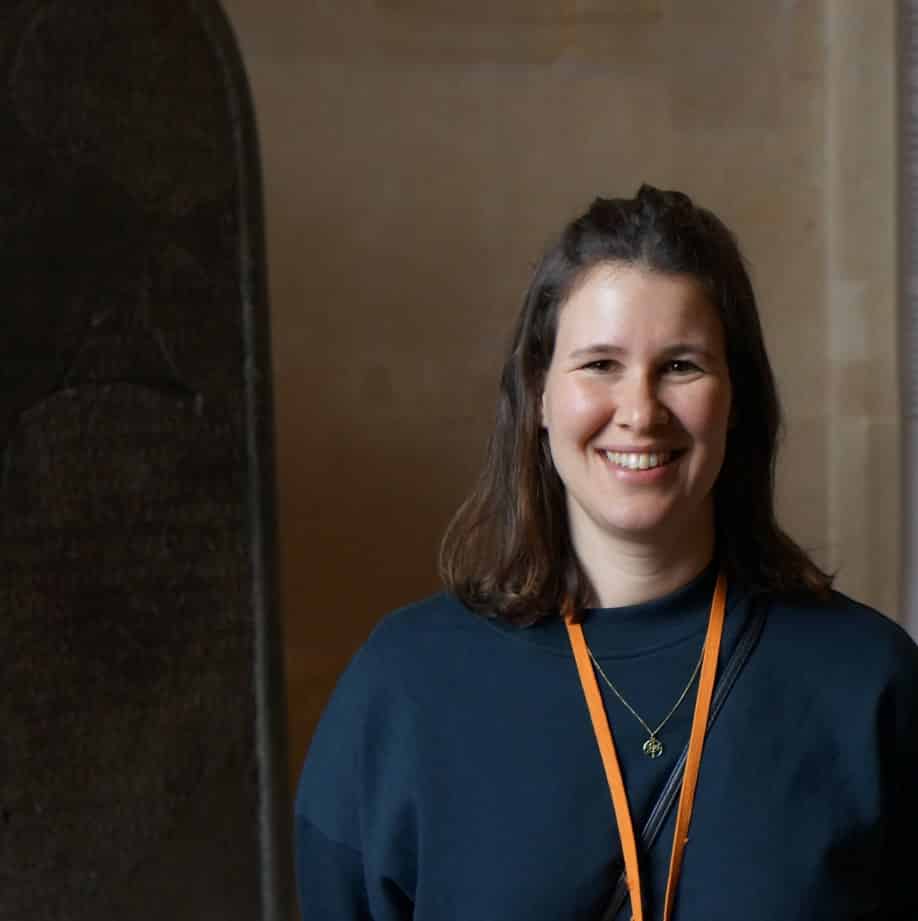