In the footsteps of Getrude Stein

Among the many famous Americans in Paris, Gertrude Stein was definitely one of them. 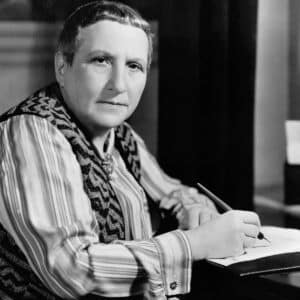 She was a poet, a writer, an esteemed art collector and a muse for many artists.

She lived most of her life in France and contributed to the art world, to feminism and to the acceptation of the lesbian relationships in France.

Did you know that the term “Lost Generation” mentioned in one of the books of Ernest Hemingway was an invention of Getrude Stein?

Did you know that Getrude Stein was the first to appreciate and value the extraordinary talented painter Pablo Picasso?

And did you know that she wrote cubist poems?

Let us discover who Getrude Stein was, what she did for the arts in general, and for France in particular.

Gertrude Stein’s life in a nutshell

Gertrude Stein was born in 1874 in Pennsylvania.

Her German-Jewish parents raised their five children in Vienna and Paris, to give them a better education.

While living in Paris, they rented a house in Passy, the same neighborhood where Benjamin Franklin* lived when he dwelled, during his days in France, a century earlier.

Her parents died when she was a teenager and her four older brothers and sisters took upon them to raise her.

Gertrude studied psychology and specialized in the effect of writing and speaking simultaneously. We will discover later in this article how this would influence her writings, like the poem “A rose is a rose is a rose“.

She was then encouraged to become a physician, but she ended her medical studies after 4 years and moved to Paris in 1903, where her older brother Leo lived.

She moved in with Leo in the apartment in Rue de Fleurus and together they started an impressive art collection of impressionist, expressionist and modern painters. They also hosted a “salon”, an elegant weekly gathering in their apartment close to the beautiful Luxembourg gardens.

Many young American writers like Ernest Hemingway and French painters like Braque, Picasso and Matisse would mingle and meet there.

In 1907, Gertrude met Alice Toklas. They fell in love and remained together until Gertrude’s death in 1946.

Alice moved in with Getrude and Leo. But after a few years Leo moved to Italy. Leo and Getrude divided their art collection and Gertrude and Alice remained in the apartment in Paris.

During WW I, Gertrude and Alice bought a big American car and volunteered as drivers for the French military hospitals. After WW I, Gertrude continued to be a patron for painters but also began to publish her books and poetry.

In the 1930-s she toured throughout the United States and was welcomed there as a superstar.

During WWII, she and Alice, being both Jewish, hid in their country house in the center of France.

Getrude died in the American Hospital in Neuilly, in the arms of the love of her life, Alice.

Gertrude and her relation to writers and painters

One of the first paintings Leo and Getrude bought together was a painting of the young Matisse, called “The Women with he hat.”

When this painting was exposed, critics thought it was hideous, but Leo and Getrude loved it and realized the potential of Matisse.

Her other brother, Michael and his wife Sarah, who also lived in Paris for several years, became the main patrons of Matisse shortly after this first purchase and established a huge collection.

But Getrude turned her attention to another young unknown painter, Pablo Picasso.

She visited his worksop in Montmartre where he lived in great poverty. She loved his work and he was extremely inspired by her.

Gertrude had a strong, compact body and a face full of character.

Picasso painted Gertrude, which took him a long time and 90 sessions !

When the painting was finally finished not many people saw the resemblance with Getrude. But Picasso answered: “ You will see that in the future, Getrude will end up looking like the painting.” Which actually turned out to be true. 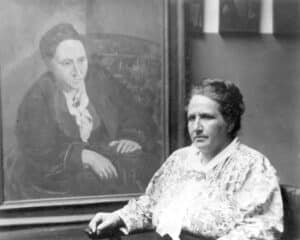 See this painting in the New York MET.

She began to buy lots of his work and thanks to Getrude, other collectors started to buy his work as well, and soon after he became the most famous living artist in the world.

Other painters, like Picabia asked to paint her as well and she even continued to be an inspiration to painters after her death, like Francis Rose and Andy Warhol.

In her “Salon”, Gertrude hosted American writers, like Ernest Hemingway and Scott Fitzgerald.

She encouraged them and would help them out occasionally. Gertrude called them the “Lost Generation” as they were expatriated Americans who felt lost and disoriented from the American values that according to them were materialist and devoid of values and emotions.

Hemingway made this term famous in his book “A Moveable feast “.

Getrude Stein did not collect paintings in order to become rich or to create a huge collection.

Her approach was to support and encourage new modern painters. She had no problem in selling a Picasso to enable her to buy a few new paintings from a yet unknown artist.

In fact, when an artist became famous after she had discovered him, she lost interest and moved on to the next.

Apart from Picasso and Matisse, among the many painters she discovered, supported and launched were Cezanne, Toulouse-Lautrec and Braque.

What is the link between cubism and writing you wonder?

Well, the answer is Getrude Stein.

Cubism is a form of art invented by Braque and Picasso.

They approached their subject while in their imagination walking around it, seeing it in many dimensions and from many perspectives, but painting it in 2 dimensions.

This is how you can look, understand and appreciate a portrait painted by Picasso.

Yes, the nose might be next to the chin, and the face can be seen from the side and from the opposite side at the same time. Because this is  how he perceived the face when looking at it.

The same goes for the work of Braque, when for instance he painted a violin inside, outside and deconstructed at the same time and on the same canvas.

This is how Getrude wrote her famous phrase “ A rose is a rose is a rose”. A rose could be seen as a subject around which you walk, you smell its odor, you touch the soft petals, while you can portray it from only 1 dimension when writing about it.

Her writings inspired many other artists and a ballet, an opera, theater pieces and movies were written after her work.

Gertrude Stein was  often interviewed and was asked to read her poetry in public. Sometimes Gertrude was recorded, so you can still listen to her.

Alice, like Getrude, was Jewish and was born in the United States.

Unlike Getrude, she became aware early on she was infatuated by women.

For Getrude it took more time to realize she fell for women.

When the two women met, they fell in love almost immediately and soon Alice moved in with Getrude and Leo.

Leo found it difficult to live in the same apartment with the two women in love.

This triggered her brother’s departure to Italy…

They split the 600 paintings and drawings in between them. Leo took all the paintings of Renoir, Getrude kept the Picasso, Cezanne and Matisse paintings.

The two women had a rather classical relationship:

Getrude wrote a lot and would entertain intellectual relations with painters and writers.

Alice typed all the manuscripts of Getrude, was in charge of the housekeeping and cooking. When they invited artists to their house, Gertrude would deal with the “men”, and Alice would entertain their wives.

Gertrude was heavily built, with strong features. Alice was slim and more delicate.

The way they dressed was different as well. Gertrude opted for comfortable and practical clothes and wore thick socks or stockings with sandals and a sports cap on her short cut hair. Alice was more elegantly dressed and had a typical 1920-s bob haircut.

Getrude’s clothing choice while living in Paris, the capital of fashion, was a strong statement of independence.

They were always together and even remained together when driving supplies for the hospitals during WW I. They nicknamed their American car “ Auntie”.

During WWII, they retired from the big cities, as they were both Jewish, they  hid together in the house they rented in the little village of Billingnin in the south/east center of France, near Aix, in today Auverne-Rhône-Alpes. The little house was visited by Picasso and other  friends.

After Gertrude’s death, Alice lived another 21 years. She became a cookbook writer and gave interviews about her life with Gertrude.

The ultimate proof of love Getrude gave to Alice. was the book she wrote called “ The Autobiography of Alice B. Toklas, where she wrote about their life together.

The ultimate proof of love Alice gave to Getrude is that she was convinced they would be reunited after her own death.

They were buried side by side in the famous Parisian cemetery of “Père Lachaise”, not far from Oscar Wilde, another famous exiled writer.

Like Gertrude and Alice, we can start by a walk through the beautiful Luxembourg Gardens in the left bank in Paris.

We will pass nearby the Art galleries, and the famed Rue de Fleurus and show you where they lived.

In the Musée d’Orsay and the Musée de l’Orangerie, we can see several paintings that were once owned by Getrude and her family.

We can visit the graves of Getrude and Alice in the beautiful and unique cemetery Père Lachaise and discover other graves of famous people that were buried there. 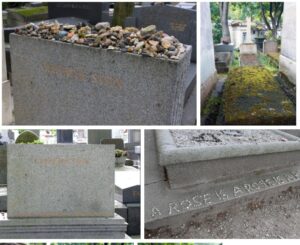 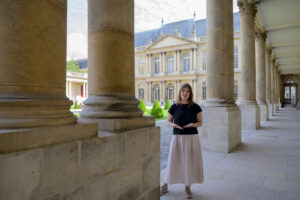 We can hop on a cab from the Jewish area to go visit a beautiful cemetery, not far from the center of Paris.

We will the tomb places of the famous writers, artists, and celebrities who lived and were buried in Paris.

We will hear stories about their amazing lives and enjoy a calm car free walk in the second most beautiful cemetry in the World.

See more of my unique tours in the Jewish Paris:

And we will walk through the Latin Quarter where Ernest Hemingway lived and where his books were published and visit the Picasso museum and talk about the friendship of Picasso and Getrude and why their friendship ended.

We can visit Montparnasse and Montmartre, two different calm and artsy neighborhoods, where all the above mentioned painters lived.

We can visit the Picasso Museum located in le Marais, the jewish Paris area.

You can also book the Suite of Hemingway at the Ritz Hotel or go have a drink, a cocktail at the Bar Hemingway of the Ritz hotel.

The life of Gertrude Stein moved me.

I hope you liked this article. If you want to book a tour in Paris with me, see my contact page.

If you want to read more, I suggest to you: The Dreyfus Affair in Paris, Benjamin Franklin in Paris, or Marcel Proust.